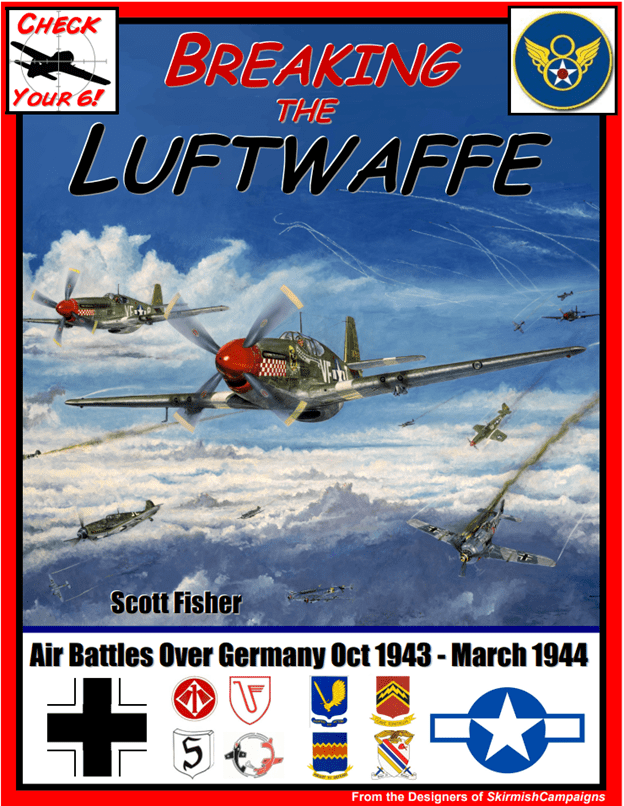 BREAKING THE LUFTWAFFE is a scenario and campaign book for the popular CHECK YOUR 6! Air Combat and Campaign Rules. The book provides three campaigns and 26 scenarios under one cover. The first 9 scenarios follow the beginning of the US 8th Air Force’s escorted strategic bombing campaign over western Germany between October 1943 and January 1944; the next 9 scenarios recreate the intense combat during the “Big Week” air offensive in early 1944; the final 8 scenarios bring together the desperate fighting during Mission 250, the first daylight mission to Berlin. The book also features some of WWII’s top aces including Robert S. Johnson, Gabby Gabreski, “Bud” Anderson, Heinz “Pritzl” Bär, Anton Hackl, and Heinz Knoke. The scenarios can be played individually, linked to form three mini-campaigns, or combined as one grand campaign.

This book contains aircraft statistics for more than 10 new American and German aircraft in CHECK YOUR 6! format for use in the scenarios. The book also contains detailed notes and rare pictures of the various aircraft featured in the campaign.

This book includes an innovative CHECK YOUR 6! campaign system that provides special victory conditions for both sides in each scenario. By accomplishing special conditions, players earn Campaign Events, similar to action cards, which are played during the scenarios. This new campaign mechanic allows players to make real-time decisions that shape the battles while adding extra dimension to the scenarios.