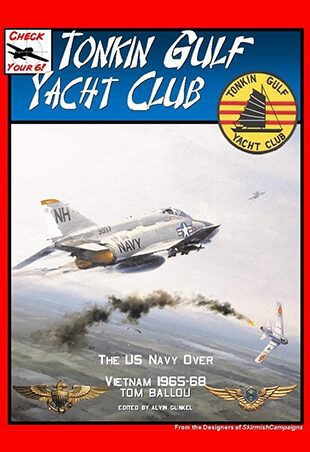 Iran Iraq Book Soon!
After many years our Iran-Iraq war CY6!- Jet Age Scenario Book is nearing completion, it will be released in 2022.

Tonkin Gulf Yacht Club Released!
After three years of development, we have released a CY6!-Jet Age scenario book focused on the air battles of the US Navy over Vietnam 1965-1968.

New Projects (update)
The SkirmishCampaigns team is working hard on several new books. We have three new CY6! Books in the hopper. We have finished playtesting a Skirmish Elite book focused on the initial fighting on Guadalcanal and have also started work on another tentatively called Tank Battles: Pacific, which will focus on several very interesting armor-infantry engagements in the Pacific Theater.

Bloody Big Battles Released
Chris Pringle’s latest set of army-scale rules has been released, along with an excellent scenario book.

Star and Pyramid Released!
After many years of development, we have released a CY6!-Jet Age scenario book focused on the air battles between Egypt and Israel from 1966-1973.

CY6! France 40 - Days of Glory Released!
British and French squadrons take to the air to defend France and Dunkirk in the sprint of 1940!

8th AF: Breaking the Luftwaffe Released!
Finally, take to the air over Germany in 1943-44!

Aussies at Bardia Released! Mark Fastoso’s latest book focused on the fight between the Aussie 6th Division and the Italians at Fortress Bardia.

Normandy’ 44-Red Devils of the Orne Released!
The long-awaited FOURTH book in the Normandy ’44 series has been released and is available in many locations.

The scenarios in each book are designed to be linked to form two or more campaigns allowing maximum flexibility in play.

The SkirmishCampaigns system features a realistic (and historic) variable order of battle for each scenario, guaranteeing countless unique scenario and campaign replays.

These books also include unique generic order of battle listings that can be translated to almost any skirmish rule system.

Compatible with These and Other Skirmish Rules

SkirmishCampaigns: France’s40-Withdrawal to Dunkirk Released!
The long-awaited FOURTH book in the France ’40 series has been released and is available in many locations.

SkirmishCampaigns: Russia’ 41-North to Leningrad Released! The long-awaited FOURTH book in the Russia ’41 series has been released and is available in many locations. Many say this is our best Russian Front book to date!

Skirmish Elite: Crete- Stalemate in the East Released!
Working with Tom Garnett, we have produced an excellent follow-up to the very popular Crete-Struggle for Maleme book released previously. This book follows German Fallschirmjagers as they assault the Central and Eastern Group areas on Crete. See more here.

SkirmishCampaigns: Belgium 40-Hunters of the Ardennes Released!
The second book in our early war France series is focused on the heroic holding actions of the Belgian Chasseurs Ardennais against the German Gross Deutschland Regiment and 1st Panzer Division. See more here.

Skirmish Elite: Tanga 1914 Released!
The “infamous” Buck Surdu and Jamie Davis have authored a Skirmish Elite book focused on the campaign near Tanga in East Africa. This book goes great with some of the nice new figures available for this interesting campaign. See more here.

Skirmish Elite: Russo-Polish War 1919 Released!
As a surprise to those who have been requesting more WWI books and books focused on the interwar period, we are proud to announce that we now have a new book focused on the Russo-Polish War in 1919. This book is full of characters along the lines of our WWI Rommel book. See more here.

Normandy ’44: Monty’s EPSOM Released! This SkirmishCampaigns book is the first British-oriented book in the Normandy series and follows the British EPSOM offensive and the counter-attack by the German 1st and 2nd SS Panzer Corps.

North Africa’ 40-’41 - Italian Misadventure and the Arrival of the DAK Released!
This SkirmishCampaigns book is the first in a series of books focused on the battles for North Africa and follows the opening fighting between British and Italian forces plus the entry of the German Africa Corps (DAK) to the theater.

SkirmishElite-Screaming Eagles at Hamburger Hill Released!
Our first SkirmishElite book (a new series of books by various authors) focused on the amazing actions of the 101st Airborne in Vietnam by Mark Fastoso

World War I: Rommel’s Route to Verdun Released!
This SkirmishCampaigns book follows the young Lt. Rommel in his first combat from the start of the Great War to Verdun.

Russia’s43-Red Guards at Kursk RELEASED!! Even though we’ve been slow in updating the webpage, we have been working full bore on two new books. We have just released our second of two books following the epic battle of Kursk. The second book, Red Guards at Kursk (just released), follows the Soviet 11th Guards Army in its counter-attack on the northern flank at Kursk.! The first book, Gross Deutschland at Kursk, follows the famed Gross Deutschland Division and its powerful drive on the southern flank of the Kursk salient in July 1943.

Kursk-Gross Deutschland RELEASED!! Even though we’ve been lame in updating the webpage, we have been working full bore on two new books. We have just released the first in a pair of books following the epic battle of Kursk. The first book, Gross Deutschland at Kursk, follows the famed Gross Deutschland Division and its powerful drive on the southern flank of the Kursk salient in July 1943. The next book in the series (due this fall) will follow several Soviet tank units in their counter-attack on the northern flank at Kursk.

Smolensk RELEASED!! We are pleased to announce the release of Russia’s 41-Ghosts at Smolensk. This excellent book completes our early Russia trilogy combining some great smaller scenarios with all the thrill of early war tank action.

Normandy: RELEASED!!! our most anticipated book is complete and now at retailers. “SkirmishCampaigns: Normandy-First Hours” features ten scenarios and three campaigns centered around Utah Beach and Ste. Marie du Mont. The book features scenarios of varying sizes and is intended for all scales from 15mm to 54mm. This book is the first in a series of SkirmishCampaigns books centered on Normandy in 1944.

Red Waves Scenario Posted want to play a REALLY BIG scenario? While working on our release for this fall, “SkirmishCampaigns: Russia’ 41-Ghosts at Smolensk” (the third book in our Russia ’41 series), we decided to make a large variant of one of the scenarios...download it here and give it a try!

Finland’ 39-’ 40-Winter War RELEASED! We are proud to announce the release of our seventh book featuring the heroic defense of Finland during the Winter War of 1939-40. We hosted a great game from this book at Cold Wars- a free download of the scenario can be found here!

Russia’ 41-Into Ukraine RELEASED! We are proud to announce the release of our sixth book, Russia’s41-Into Ukraine. This book is available now, just in time for Fall-In (3-5 November). The book features lots of early war tank action in Ukraine (even a T-35 scenario!). For you “track heads”- this is the book for you! More information about the book can be found here!

France’ 40-The Ghost Division Released! We are proud to announce that our new book featuring Rommel’s famed 7th Panzer Division is out. This book follows Rommel’s Division in the invasion of France. See more information about this great book, and a free scenario is here!

Poland’ 39-The Black Brigade Released! We are proud to announce that our new book featuring the famed Polish 10th Mechanized Brigade is out. See more information about this great book here!

New SkirmishCampaigns Scenarios and Downloads! We have started a new scenario area on the DOWNLOADS page where you will find some really great scenarios- Westerplatte, Hedgrow Hell, and a new Sicily ’43 scenario Toward the Sound of the Guns and Rabka-Mszana Road from our new Poland book! We have also made our “famous” random events table and Polish AFV stats sheet available for download. We look forward to your feedback. Enjoy!